When working on projects, there’ll be lots of times when your microcontroller needs serial communication to talk to other devices or other micros. The most common example of this is adding IoT capabilities to your Arduino board or PIC using ESP8266 or GSM module.  A number of sensors and LCD displays also send and receive data serially.

What is Serial Communication?

Serial data transmission answers all the above problems, most especially the first one, as cost and limited pins are common issues in microcontroller system design.

The clock signal ensures that reception of correct data bits. In SCI, adding overhead mitigates the effect of the absence of a clock signal. The added overhead affects throughput (the rate of production) since they don’t carry useful information. However, the absence of the clock signal also means that SCI is simpler to setup and implement as compared  to the complex hardware needed by synchronous protocols.

The added overhead I was referring to are the synchronization (or sync) and parity bits. The sync bits are start and stop bits to indicate the start and end of transmission. When the serial bus (or data line) is idle, the voltage level goes high. The sending device sends a logic 0 (the start bit) to kickstart the transmission.

Stop bits, which is one or two logic 1’s, tail the serial data, marking the end of transmission.

The baud rate, or speed of transmission, is also part of the protocol. It is important that the sender and the receiver should have the same baud rate. The standard rates are as follows:

9600 is the most common and is the default baud rate for most serial terminals and simulators. I’m not sure why is that but I know that 9600 is the maximum serial port speed of old IBM 5150 computers (popularly know as the first “personal computer”).

If you connect a serial output pin which sends a “A” (ascii 41 or 01000001 in binary) character to the oscilloscope, this is what you would see on the screen:

A microcontrollers UART device has a transmit (Tx) and receive (Rx) line. If you want to interface your micro to another device which uses serial communication, you need to connect the micro’s Tx to the device’s Rx and vice versa.

The number of UART device varies among microcontrollers. For example, the Arduino UNO’s ATMega 328p has one while the Arduino Mega’s ATMega 2560 has four.

The PIC16F84A has no UART device. The only way for it to communicate serially is through bit-banging — a method of directly sending bits by pulling a pin high or low at a specific length of time.

Example: If you want to send the binary data 00110010 serially at a speed of 9,600 baud, you could toggle the state of the Tx pin you assigned based on the binary sequence. The length for which the pin remains on the specified state (1 or 0) would be 104.167 us.

PICs like the PIC16F877A or PIC16F628A each has one UART module. The Beaglebone Black and Raspberry Pi also contain serial communication hardware.

Arduino boards communicate with the PC via USB cable or to other serial devices using the serial pins. Each arduino board has at least one serial port and is at digital pins 0 and 1 (Tx and Rx respectively). Using these pins while loading a program to the board causes an error because it’s the same pins for USB connection.

The USB port (which is also serial) also uses different voltage levels and protocol. Arduino boards have USB to TTL chips included to interface the board to the computer via USB. Some ATMega micros have bootloaders that doesn’t require a USB to TTL chip.

The Serial.begin() function specifies the baud rate. Here it is set to 9600 baud.

This example reads analog voltage at pin A0 and stores it to the variable sensorValue. The sensorValue is now visible in the serial terminal via the Serial.println() function.

If you want your arduino to receive data, you’ll be using the Serial.read() function like how it’s use below:

Running out of pins to use is common in microcontroller programming. This is especially true for the Arduino UNO which has only one serial port. The GSM module in fact uses software serial to communicate witht the arduino board.  Arduino’s software serial library is demonstrated by the included built-in example File -> Examples -> Software Serial -> SoftwareSerialExample:

You can assign whichever pins are available for use as Tx and Rx pins! (The above code assigns the serial pins to digital pins 10 and 11). Once there is s software serial object, you can now use the functions of the library which are the basically the same functions as with hardware serial.

Pin is the name of the Tx pin (e.g. PORTB.0) and Mode is based on this table: 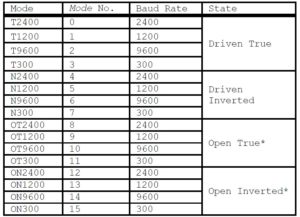 Item would be the data you would send.

For more info about the SEROUT command, read “Serial with PBP” or the official PBP compiler manual.

Software serial in assembly is longer work. Here’s how to send a single character “A” using a single pin as transmitter:

Here I created a delay routine to keep the state of the pin for about 105 us (approx. 1/9600). I also needed to keep the line idle for a longer time so that the receiving device can distinguish the start bit and the consequently the rest of the data bits. And so I created another delay (delay2) which lasts for around 65 ms.

The character “A” is 41 in hexadecimal. The LSB is sent first and then the rest of the bits follow. The waveform of the serial data (as seen from an oscilloscope) would look like the image above.

If you want to send a string, then you need to know the binary equivalent of each character in the string and just sent each one after the other like what I did here. But if you want to save time and effort then you probably need to use…

PBP has the HSEROUT command for sending serial data using the PICs UART device. Naturally, this function is unusable for devices that don’t have UART module such as the PIC16F84A. The syntax for this command is simple:

Where Item is the data to be sent. Before you can use this command, you need three DEFINES: 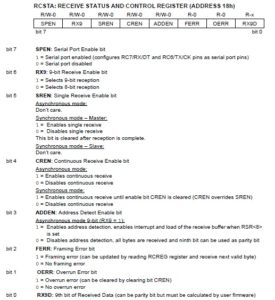 When we did “DEFINE HSER_TXSTA 20h”, we set the TXSTA register equal to 20h which is 00100000 in binary. This corresponds to bit 5 (TXEN) being set while the rest of the bits are cleared. This is needed to enable serial transmission from the PIC to another serial device.

Doing “DEFINE HSER_RCSTA 90h” gives the RCSTA register a value of 90h or 10010000 in binary. This sets bit 7 (SPEN) and bit 4 (CREN). The SPEN bit is the master switch of the entire UART module while CREN allows for continuous receiving of bits on the RX pin.

The baud rate is set by manipulating the SPBRG register and the BRGH bit on TXSTA. The baud rate formulas are as follows:

Using the formulas above, the datasheet provided a table for the common baud rates using the usual oscillator values. This is for the 4 MHz oscillator low speed: 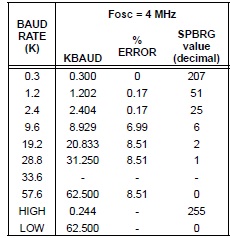 This is for the same oscillator at high speed setting: 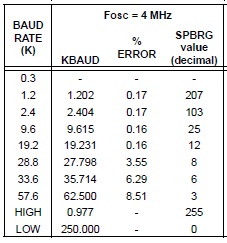 Look at the %ERROR column for the 9,600 baud rate at both tables. That’s more than 40x of difference in error!

Now back to the code. I placed the value 25 to the SPBRG register as suggested by the table above. Then I set the TXEN and BRGH bits on the TXSTA register, followed by setting the SPEN bit on the RCSTA register. The next part is placing 21 hex (! character) in the empty register char0.

To send the data, the contents of char0 moves to TXREG register. Checking bit TRMT of the TXSTA register ensures that the data is now out from the buffer and is on its way to the other device.

Again if you need to send a string of characters, you just need to move one character to the TXREG register at a time and wait for the buffer to be cleared by checking if the TRMT bit of the TXSTA register is set every after you sent a character to TXREG.

Just like any other peripheral, using serial with the Beaglebone Black and Raspberry Pi involves the use of device tree overlays. I will consider these two as one device since both are inherently Linux computers. If you need a more specific approach, a tutorial on serial for beaglebone black can be found here while a tutorial for raspberry pi serial communication is presented here.

Once installed, you can now run the minicom app:

After that, anything you’ll type on the terminal will be sent out to the serial port. Easy!

The best way to learn more about serial communication with microcontrollers is to code them yourselves! So I suggest you try on the example codes here and then start building projects. I hope you have fun as much as I did! 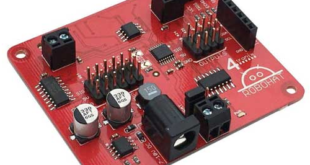 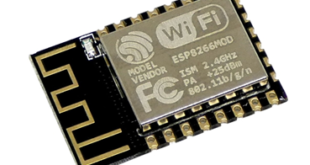 Making Your Own ESP8266 Board 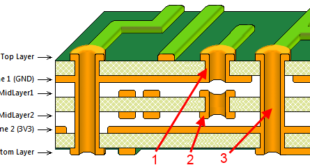 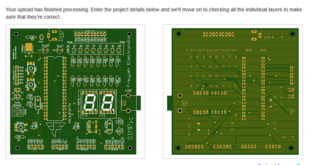 In the past, I used to build project prototypes through breadboards and perfboards. However, the …