Before we dive into programming, we need to learn microcontroller basics first!

What is a microcontroller? It is basically a computer in a single chip.

A microcontroller is a computer and can be instructed through programs. But it's not used like your own computer as it's mostly utilized to control products and devices automatically. They are used in medical devices, appliances, toys, automobiles, and more! The low cost of microcontrollers is favorable in these areas over a microprocessor (which is already expensive, by itself) that still needs other components called peripherals.

The memory represents two parts: program memory and random access memory (RAM). Program or Flash memory is where the program is stored. RAM is the location of registers that are needed to create applications for the microcontroller. In other microcontrollers, RAM is part of the CPU and is called a Register file. 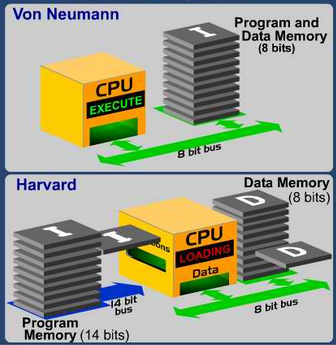 The input/output unit is the interface between the outside world and the insides of a microcontroller. An I/O unit or port can accept data, send data or be left hanging. A pin on a port can also have other functions assigned by a register on RAM.

All microcontrollers have timers which can serve a number of purposes. A microcontroller timer can be free-running (runs independent of the program) or a watchdog (resets in a specific time interval). A free-running timer is used, for example, to count button presses or create a clock signal.

A program is a set of instructions to be executed by the CPU. It can be low level (assembly) or high level(C/C++, Basic, Python). They are converted to a combination of 1's and 0's or machine code.

A low level program or assembly program uses mnemonics that are human readable. No assembly language is acceptable to all devices: they are created for a particular machine.

An assembly program can be directly converted to machine code and so takes up less space inside a microcontroller's program memory. Time critical applications are also better coded through assembly because of instruction cycle awareness.

A program is written using an IDE and is then assembled (if assembly language) or compiled (if high level language). The machine code generated after compilation and assembly is encoded in what is known as a binary file. A HEX file is the ASCII representation of binary files. Some microcontrollers use BIN files instead of HEX files.  The HEX or BIN file is read and interpreted by a programmer software. The decoded machine code is then burned to the microcontroller flash memory.

Programmer hardware is needed to load the program into the microcontroller's flash memory. The hardware may use different ways to program the device. When computers were older, programs are loaded to the microcontroller via the parallel port. The size of parallel ports is a disadvantage to modern computers and thus have been removed completely. Nowadays, microcontrollers are programmed via USB using In-Circuit Serial Programmers (ICSP). For PICs, the ICSP hardware is known as PicKit. For AVRs, it's Atmel-ICE. You can also create your own ICSP circuit.

The Arduino has a bootloader which accepts the program sent by the user through USB. PICs and AVRs can also use bootloaders. The ICSP is still needed for loading the bootloader the first time.

Microcontrollers typically don't consume much power. Most devices run on 5 V while some run on 3.3 V and draws in around 200 mA. Note that microcontrollers must be run on voltage as specified on their datasheets. Doing otherwise means damage to the device.

Next >> The PIC16F84A - A Beginners Microcontroller