A RGB LED is a special light emitting diode which can produce 16 million possible colors, all by combining the colors red, green and blue in varying intensities. This tutorial will show you how to use a RGB LED with Arduino. 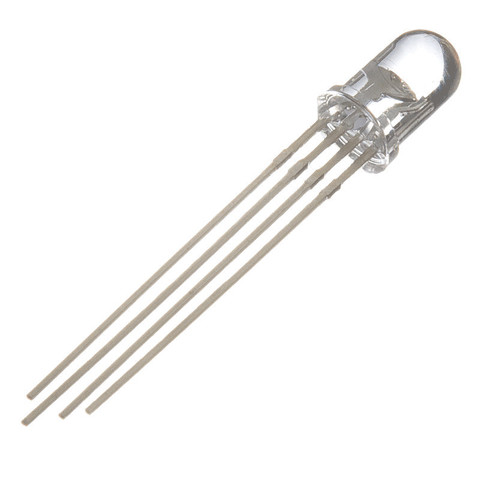 Such LED is the same as a red, green and blue LED connected like this, hence the four pins: 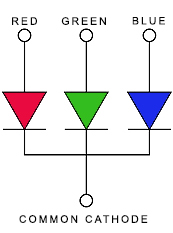 Which pin is red, green or blue? The length of the pins tells us this: 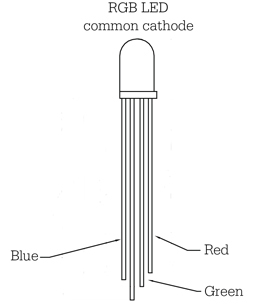 The shortest pin is always the red LED. The blue LED is the next shortest and then followed by the green LED. Just like the normal LED, the longest pin is the common cathode pin.

The diagrams above are for a type of RGB LED where the cathode is common. For a common anode RGB LED, the diagram is reversed: 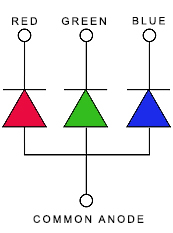 A common anode RGB LED looks the same as a common cathode type but the longest pin is now the common anode pin.

Here is a Fritzing diagram on how to connect a common cathode RGB LED:

On the other hand, this is how you would connect a common anode RGB LED:

The resistor in the diagrams are there to limit the current to the LED. Possible values are 220 ohms to 1k ohms. You might think that only one resistor is needed and should be connected to the common pin. That would result in an uneven current distribution on the LED when you want to produce a color besides red, green and blue.

Also, noticed that the R, G, and B pins are connected to PWM pins? That’s because to produce different colors, we need to combine red, green and blue lights at different intensities. The intensity of the LED can only be varied using analogWrite() and this function is only usable for PWM pins.

Here is a sketch that toggles between red, green and blue colors:

Note that this sketch is for a common cathode RGB LED and follows the fritzing diagram for such LED above. Here, the color red is produced when I run these commands:

The color green is produced when I do this:

And finally, the color blue is produced through this:

So toggling between the three colors is just placing these commands inside the loop() with delay in between.

Now what if you want another color aside from red, green or blue? Remember that you have 16 million colors to choose from!

I found this website that gives the RGB values for different colors.For example, the color turquoise is rgb(6%, 87%, 69%) according to that website. This is converted to analogWrite() by just dividing those numbers by 100 and multiplying by 255. So turquoise is produced when I write this out:

And yes it is turquoise: Bret Stetham created a great library that makes Arduino RGB programming easier. Instead of writing three analogWrites(), the library allows you to write colors in one line of code:

But what I liked most about the library is the color wheel function. Here’s an example:

[the_ad id=”3059″]
Arduino
Yeah producing the color wheel looks very easy here but it’s actually quite complicated. Bret had to change the RGB values to HSV which is short for hue, saturation, and value. It turns out, it is easier to produce colors if HSV is given rather than percentages in RGB. [the_ad id=”3059″]
Share
Previous Using an Arduino Turbidity Sensor
Next Raspberry Pi GPIO Tutorial