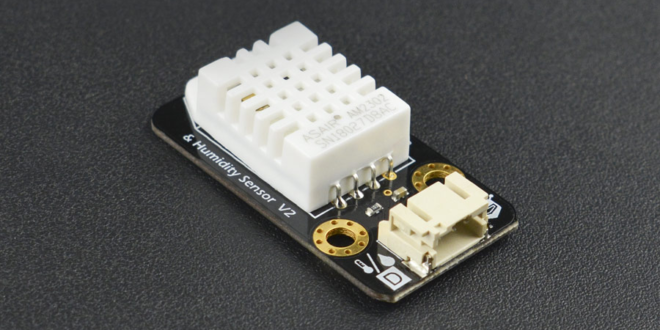 How the DHT22 Sensor Works

The DHT22 temperature and humidity sensor is a common sensor; in fact, there are tons of tutorials out there teaching you how to use it with your Arduino, Raspberry Pi or other microcontrollers. What prompted me to write about this sensor is my curiosity on how it gives out two sets of data using only one wire. And that is what this post is all about.

Compared to the DHT11, the DHT22 has a wider temperature range and better accuracy. Physically, the housing of this sensor is larger than the DHT11.

The DHT22 is also called AM2302. Adafruit says that AM2302 is just the wired version of DHT22. Seeed also calls their DHT22 grove board as AM2302 temperature and humidity sensor pro with emphasis on “pro” since it is superio to the DHT11.

I discovered that AM2302 is really the DHT22 with an included pull-up resistor on its DOUT pin.

Anyway, if you own the same module as I do, note that there is already a pull-up resistor included in the module. The same is true for Seeed’s DHT22 board.

The DHT22 module from DFRobot has three pins as shown: 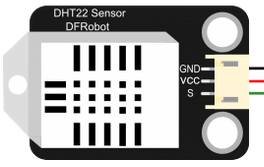 Data is read to the microcontroller from the S pin. Since there is no clock pin like in I2C and SPI, the DHT22 must be operating in asynchronous serial, like RS-232. The required pull-up resistor also means that the sensor can operate with both 3.3 V and 5 V sources.

Because of this communication protocol, called single-bus, you can connect the S pin of the module to any digital pin of a microcontroller.

The starting timing diagram is illustrated below: 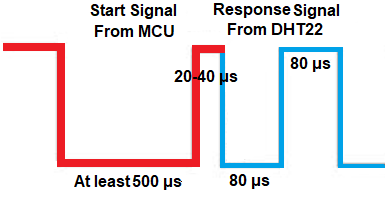 The red line is initiated by the microcontroller while the blue line is the signal from the DHT22. Only after a correct startup will the DHT22 start sending data. 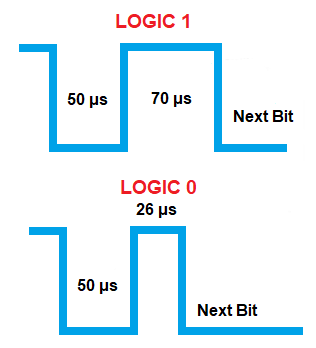 After sending out the two bytes for humidity and two bytes for temperature, the device ends the transmission with a parity byte before pulling the bus high. The parity byte is just the sum of the four data bytes.

Below is an example timing diagram when a DHT22 sends out a single humidity and temperature reading:

Now if you do the math, one transmission would roughly take 5 milliseconds. However, it is recommended that you wait at least 2 seconds between transmissions because of the nature of the sensors used. Thus, the DHT22 is not recommended for fast temperature readings.

If you have the time, you can create your own library using the knowledge of its operation I just described. Otherwise, there are plenty of libraries you can use.

For the Arduino platform, I recommend the SimpleDHT library by winlinvip. Here is an example sketch from the library:

For the Raspberry Pi, there’s Adafruit’s DHT library for Python. You may need to update your packages first by issuing:

Here is the example Python script from the library:

For PIC users, I will be writing a library for XC8 so stay tuned!

Hopefully I’ve helped you in any way with this article. If you have problems implementing your microcontroller project using DHT22, kindly create a thread on our newly started forum page!