The BH1750 is a light intensity sensor which interfaces with a microcontroller through the I2C bus. It can directly provide lux values without further processing unlike CdS cells or photodiodes.

Illuminance is a measure of how much an incident light lightens up a given surface. It is given in lumens per square meter or lumens for square foot; the latter is equivalent to a foot-candle while the former is to a lux.

The BH1750 offers lux measurement in two modes: continuous and one-shot. When in continuous mode, the sensor measures light intensity non-stop. When in the latter mode, single measurements are done then the sensor powers down.

Wiring the BH1750 to Arduino

For this article, I am using the GY-30 breakout board:

The breakout board not only contains the sensor (in circle) but also other required components. This makes it ready to interface with a microcontroller like an Arduino.

As mentioned, the BH1750 uses the I2C bus, hence, it uses only two pins for data:

There are tons of Arduino libraries for the BH1750, but the one I find easiest to use is by Christopher Laws.

You can download the library from the link above and extract if to your Documents/Arduino/libraries folder or you can use the IDE’s library manager:

Search for BH1750 and Laws’ library is the first result: 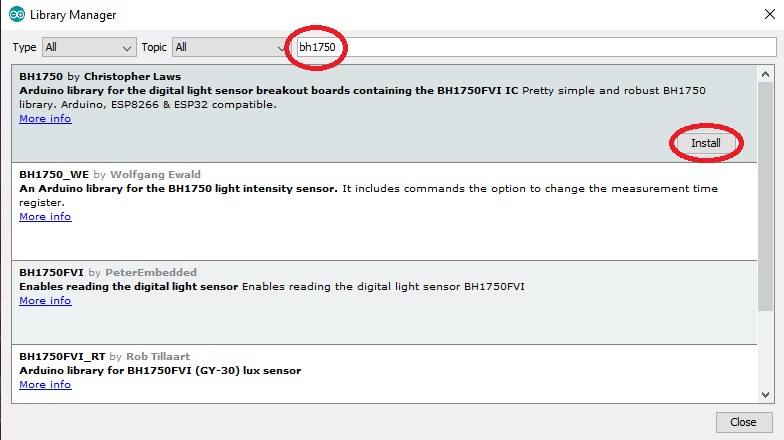 The library comes with five examples. The best one to get started to is the BH1750Test.

Arduino
Reading the lux values is fairly easy. First step is to create an object from the BH1750 class which is usable after including the library:

Arduino
Then, invoke begin() function then the readLightLevel() function which returns a float value:

Arduino
In BH1750Test sketch above, the lux levels are printed in the Serial Monitor.

By default, the library uses continuous high resolution mode. To change this, pass the parameter either to begin() or to another function configure(). The possible parameters are:

For example, if you want to use one shot, high resolution mode, then:

Normally, the sensor reverts to the default mode after a data is sent using one shot mode. However, the library automatically uses the same mode even if the previous mode is one shot.

In case you’re wondering where lux meters are used, just look at your phone. The brightness of your phone’s screen adjusts to ambient light. This is possible through a lux sensor like the BH1750.

Buildings follow a set of standards for the correct amount of illumination. Checking this requires a lux meter. Here’s the recommended illumination for rooms in a house:

How to Use TM1637 and Four Seven Segment Display Module

How to Use Load Cell with HX711 and Arduino

Measuring an object’s weight can sometimes be part of a bigger project. And unless you …